A Series of Unfortunate Events

So it was this last weekend past, that I had planned to relocate from London to Dublin. After searching around for a decent carrier to ship stuff for me (the cheapest (with insurance) being around 1000£ !) I found the best and safest option was to do it myself. The plan was carefully laid out like so;

Ambitious you might say? I though not, I had set plenty of extra time in the plan for making the journey, even with problems. Only doing one major thing each day. Or so I thought … what I’m about to tell you, you could not dream up. I am still recovering from tiredness even today… (warning, long story below)

Off to a bad start

It all started before I even got the Van. To be picked up at Sixt car rental in Vauxhall Station at 7 PM, Thursday night. On arrival 15 minutes early, I decided to grab a coffee and wait until 7 PM before going in to collect it. On doing so, I was told that I needed the paper-part of my driving license, because i’m from N. Ireland. Y’see if you’re anything other than DVLNI, there have a 24 hour hot-line that can be used to question the paper part, but for N. Ireland the phone line is always busy and goes to an answering machine after 3 PM. Of course this is mentioned nowhere.

Now, the van place shuts at 8pm, so I have exactly one hour to go back to my house, collect the paper part and get back before it closes. Given that it took me 45 mins to get there via walk/tube, this was going to be tight. I jumped in a cab, explained the situation and we tore around London. I arrived at my house at 7:30 PM, with exactly 30mins to get back. The knock on effect of not getting the van tonight would mean trying for a later boat tomorrow. Researching this in the cab, I found there were no other places available on any other boats at short notice. Stuck in unusually heavy traffic, my sister and her boyfriend (both also in the cab and helping me with the packing) decided to phone ahead to explain the Van was urgently needed for ‘a wedding’ the next day and could they stay open a ittle bit later. We were told, 8:05 PM. 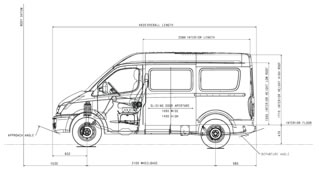 I sprinted in the door of the Van place at 8:05 PM exactly and got the Van, some late night packing and we were all set. Drama over, you’d think …

Saturday morning then, getting up at 7 AM to pack more stuff and leave London at 8:30 AM. This would give me the recommended 5 hours travel time to Holyhead (Wales) plus an extra 2 hours on top; for breaks, petrol stops and any bad traffic. Plenty of time you’d think. My boat from Wales left at 3:30 PM, and I knew from yesterdays adventure, there were no other boats with space available for a van.

Getting out of London took half an hour more than expected, with rush hour traffic etc. But I still had 1 hr 30 mins overspill so I wasn’t worried. Until hitting the M1 north-bound. A combined roadworks section between two junctions and a large car pile up accident left me sitting in the van for almost two hours not moving. Engine-off. Watching time slip away, I realised that I now had to make up time to have a chance of catching the boat in Wales. Calculating that I needed to hit junction numbers x at a certain times on the M6, I was cutting it fine. Very fine.

After some phoning I found that I could transfer onto a later Scottish boat from Stranraer to Belfast. But choosing this option I would need to make a decision at junction 20, going any further trying for Holyhead would mean I’d risk missing both boats altogether. I hit junction 20 at exactly 1:30 PM, the cut-off point for heading onto Wales (via A roads) and I decided to go for it. But 30 miles into the Welsh countryside, after stopping for petrol I looked at the stats, now 200 miles to cover in 2 hours on A roads. Meaning averaging 100mph for the journey. Rain and bad weather hit and traffic was down to 40mph.

So turning back out of Wales and heading north, I was facing another 4 hours of driving, a boat to Belfast and 2 hours more driving down to Dublin. Which is what I did. I made the 7 PM boat in Scotland with half an hour to spare, and eventually arrived in Dublin at midnight. After an 8:30 AM start and 621 miles later (!)

At this point on Friday night arriving late into Dublin, I had to unpack, three flights of stairs and some heavy lifting got most of the stuff out. I had to unpack then, since I had a 10:30 AM boat to catch back the next day.

Getting up at 6am with around 4 hours sleep, I unpacked the rest of the stuff on Saturday morning and left with plenty of time to catch the boat. Following sign posts for the docks around Dublin was easy and I could almost see the sea, when I came across a T-junction, left or right and neither showing a sign for the boat. A little stressing and some ‘direction asking’ and I was back on track, making the boat with time to spare and finally thinking I could chill out bit.

Now all I had to do, was drive the van back to London today, return it to Sixt tomorrow (Sunday), and fly back on a mid afternoon flight. Simple, easy, no problem … you’d think …

Making good time down the M6/M40 route I arrived into west London at 7:30 PM. With no deadlines to meet tonight, all I had to do was park the van up at my brother’s flat (south, east London) and get some rest. Which would have been super easy if it hadn’t of been for the Tour de France. Why this event is in London, I don’t know. Possibly just to screw with me.

So this amazing sporting event had closed every single bridge over the Thames river, yip, all of them. Traffic in north London was insane. I have never seen anything like it. Crawling for hours in one direction to find it blocked and then crawling back in another. I was watching the temp gauage of the van go up and up. Seeing many other drivers braking down, I opted to turn the engine off at every chance. It soon became clear, I wasn’t getting out of this anytime soon. On my third circle around Piccadilly circus, I decided to go way, way east and then south. Hoping to avoid any more closures.

By the time I had done this, it was 11:30 AM and the bridges were finally opening. Crossing Tower Bridge, I arrived at my brother’s flat at midnight. Exhausted.

Arriving in the flat that night, some googling told us that the Tour de France spectacle, would be south of the river tomorrow, actually cutting right through where I was now parked, starting at 6 AM. A number of crossing points would be open for traffic to pass through in half hour periods and for me, that meant leaving the house at 6:30 AM.

Fueled with some take-out food I was tempted to head out again that night, parking the van somewhere over the crossing point. Instead I opted for some sleep and 6am start the next day.

Nail in the coffin

Getting up on Sunday was tough, but I dragged myself out, hitting the road at 6:30 AM and getting over the crossing point. Yay! etc. But Sixt car rental doesn’t open till 10am on a Sunday. Sitting in a parked van for 3 hours drifting in and out of consciousness, I realised I was becoming strangely attached to the van.

Anyway, ignoring that and getting a Starbucks breakfast, I left it back at 10:00 AM exactly. I was ready to go when Sixt said something was wrong with my booking/return. .. After waiting an hour in Sixt’s car rental offices for a manager to sort out their own booking problem, I finally left the place.

With a good 4 hours to spare before my final flight back, I thought i’d take it easy, leave my luggage in at Paddington Station and wander around Bond Street. But after all that had happened I realised I did not want to take any more risks. Anything and everything could go wrong and probably would; left luggage screwing up, tube delays, heathrow express problems. So I opted to head out to Heathrow straight away, giving me 3 hours semi-conscious time in the terminal before my flight.

Here’s a Google Map of the Journey It appears I have chalked up 999 miles in two days with 8 hours rough sleep. I’ll put it all down as experience and character building.

such unpleasantries as a giant pincher machine, a bad casserole, a man with a cloud of smoke where his head should be, a hypnotist, a terrible accident resulting in injury, and coupons.— Lemony Snicket