Bugle, FAQtory and other things

Just a quick update to explain what I’ve been working on lately.

Some years ago (lets say 3) I was approached by a long-time business pal. He had the idea of creating a very simple FAQ gathering web application. It would offer no other features, only questions and answers, and would provide a rich knowledge base for those working in the field of project management. Sound familiar ?

As the years passed and other projects, distractions got in the way, the FAQtory (as it was named) was put on hold. Then in September 2008, stackoverflow launched and soon after their 3rd party offering, stackexchange and following that an entire barnyard of clones; stacked, cnprog, soclone to name a few.

This was all a bit dis-heartening, given we had the idea some years ago and never jumped on it. Around Christmas last year, I picked up the FAQtory again, dusted it off and got to work in my spare time building it. Right now I am at the final stages of styling the UI and launching the first version as a sub site at pmfaqtory.com. 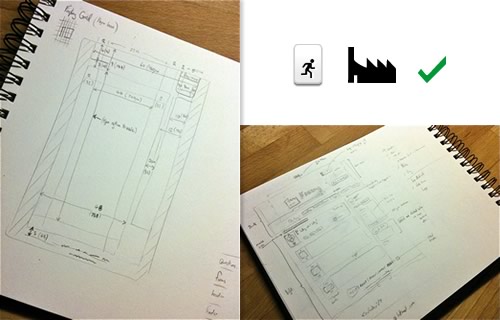 some notebook sketches made while designing the FAQtory

So with my attention on the FAQtory, work on Bugle has been put on hold. After the FAQtory launches however, i’ll be back developing on it again. Being a one-man show its hard to maintain a focus on more than one app at a time. Im encouraged by Rework and DHH’s concept of a little italian restaurant on the web

I’ve learnt a great deal from building these two apps and in many cases I’ve applied learning gained from experiences in one, to the other. I also have some valuable by-products I hope to share. I’ve already mentioned some on this blog and on github. So stay tuned, in future posts I’ll try to explain more of the decisions I’ve made while building each app, and hopefully get around to open sourcing more code.

no comments yet, add yours below